To avoid potential erosion damage caused by scale in a quench system’s heat exchanger, a Lakos In-Line Separator was included in the original design of the quench system for a Midwestern lawn mower blade manufacturer. The manufacturer needed a filtration system that would remove the scale particles caused by cooling the heat-formed mower blades in a polymer liquid quench tank.

Because the quench tank is so small (only 360 gallons), it is important that the Lakos Separator (recirculating the tank at a rate of 120 gpm) works quickly as well as efficiently. According to the manufacturer’s metallurgical engineer, “The small quench tank has large cooling demands and therefore large demands on the separator. The heat exchanger may have experienced a lot of wear and plugging without the separator.”

Purging into tanks at a continuous bleed to eliminate the scale from the separator, the manufacturer avoids the inconvenience of downtime and excessive labor costs. Consequently, the maintenance of the quench system is kept to a minimum.

According to the metallurgical engineer, “The separator must do … and does … a good job in removing scale to protect our heat exchanger from erosion.” 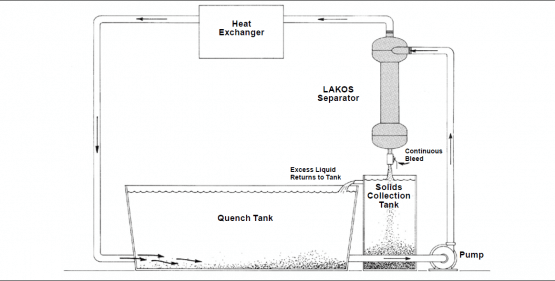